While I still have general Market photos to share, I thought I would start to introduce to you the patterns that we released while at the show. Each day you will get to meet a new addition to the Fig Tree family with a few upclose and personal shots and a bit of an explanation. Throughout the week, the patterns being "introduced" will have some specials on twitter. So if you don't twitter yet, well you might wanna start just for now...

Easily the quilt pattern at Market that got the most attention, most likely because it we had a great little setup where we hung one version on our booth wall and MODA hung the other version on their booth wall. To make it better, they happened to be directly across the aisle from one another as if they were chatting for the duration of Market... or as if someone had planned it that way.... :-).

This pattern is really 3 patterns in one.

1- the most expected version with a scrappy color chain, and cream background blocks.

2- The same chain but with a smattering [ I love that word!] of simple blooms across the top, 7 to be precise.

3- The exact same quilt, but done in reverse. Where the chain is cream and the background blocks are all various colors. The background blocks look like mosaic tile squares and the pattern is completely unexpected. No one believed it was the same pattern. That is what I loved the most about it. I love a little surprise! Sometimes its the most simple ideas that are the best. ...the traditional chain version made with "Breakfast at Tiffany's" 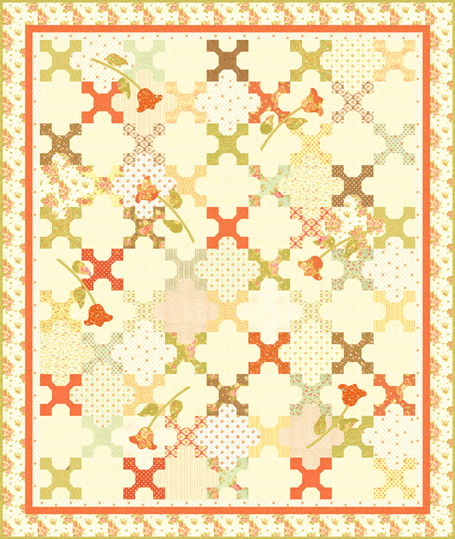 ... ...the traditional chain version made with ""Fresh Cottons" embellished with the applique blooms. This is my personal favorite and it is currently the featured quilt in our office. Love the softness and movement of it all! 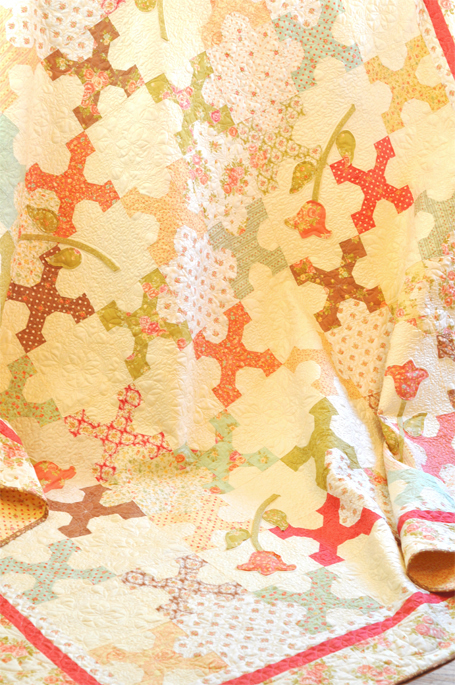 ... the shot we used for the cover of the pattern. 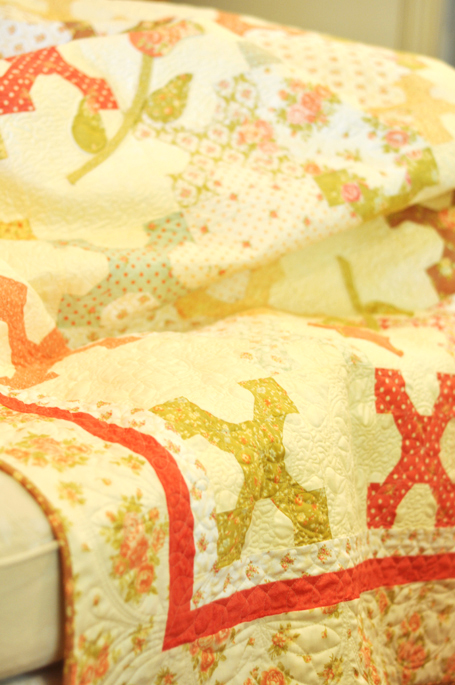 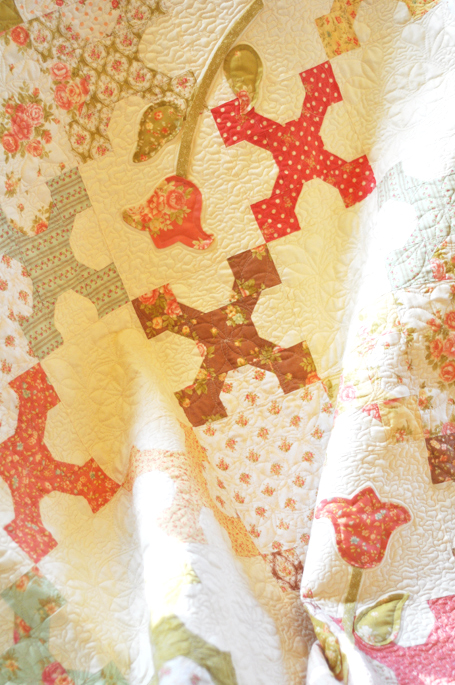 ... a little closeup of the applique. 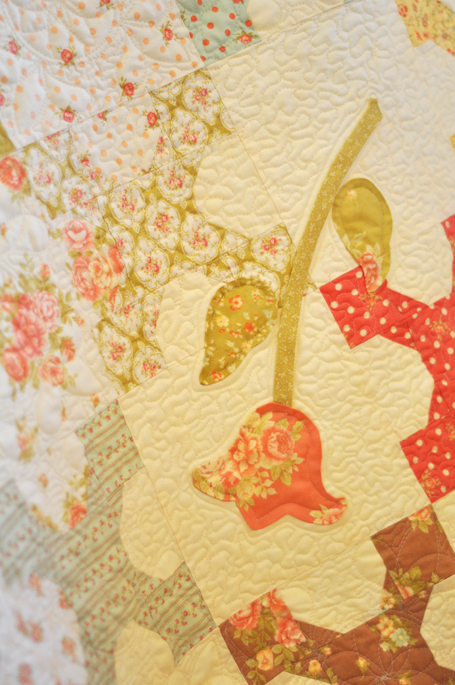 ...now I have a little confession to make. I didn't quite get all of the applique done before the Market deadlines came about. So my wonder of a quilter, Diana, quilted around some of the unfinished appliqued blooms. Here you might be able to see that the end of the stem or the tips of the leaves aren't quite stitched down. That might be another reason why this little lovely is on our couch. It has the vain hope of being finished. It could happen!

The reverse version. This is one that surprised everyone so much. No one thought that it could be the same pattern. It is, I promise! Just a little color reversal can do so much! 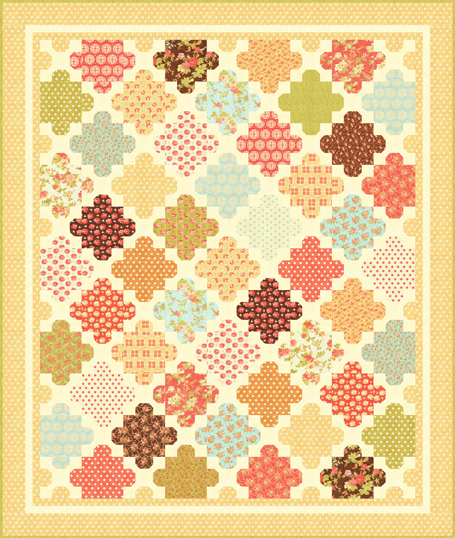 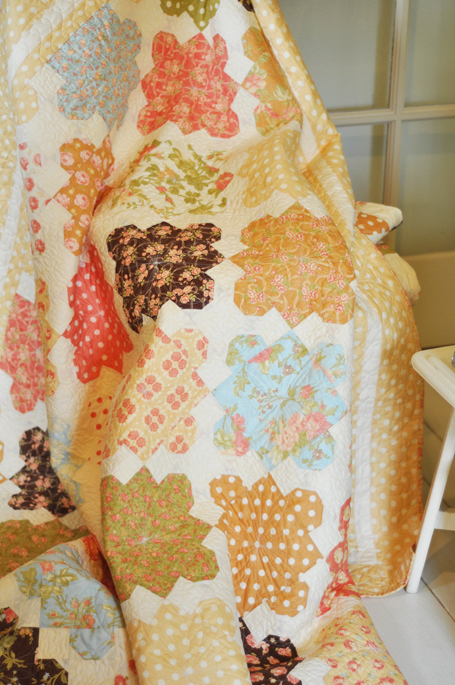 ...don't they look like mosaic stepping stones or something? 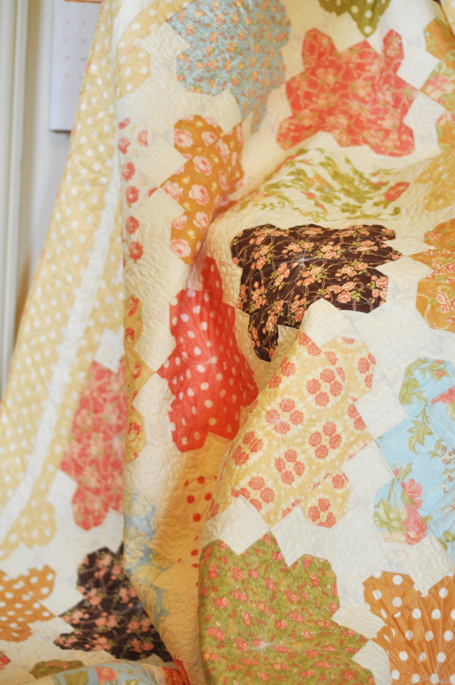 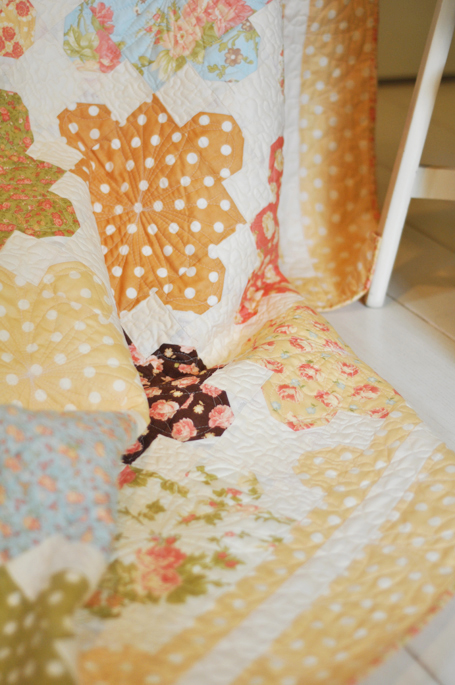 Fabrics Used: Either (2) Layer Cakes or (1) Fat Eighth Bundle + (1) Charm Pack or Yardage of course. Cream Solid for the back or chain and the fabric of your choice for the borders depending on which version. If you are interested, feel free to look up exact yardage amounts on our site here.

Talk to you soon.

Gorgeous. Amazing what a little color play will do.

I loooovvvveeee this design. . . ! Seriously - this is now my very favorite.
Pure genius!!
xo, Bren

This was defintely one of my favorites!

GORGEOUS! I don't know which version I prefer more. They're all lovely!

I love all 3 versions. Not sure which one would be first.

Absolutely adore the reverse version, how clever! If only I had the patience to follow patterns...

Love them all...now just to decide which version I want to make! I have all of my rows pieced together now for my Jelly Parfait...waiting on sashing to finish!

I love the reverse version the most. It really caught my eye when I was looking at your previous posts!

Love it! I think the third version is my fav but they are all wonderful. Your fabric colors are always yummy!

Really great design! I love the variation. A great versatile pattern. I really wish I would have gotten some patterns at market! I'll have to order through Moda!
Take care.

Stunning! Love the Fresh Cottons quilt with the applique.

Love the colors. So peaceful. Love the white polka dots on yellow.

I love all the versions. It is officially near the top of my list of favorite quilts ever! Such beautiful fabric too!

They are all so beautiful!

Awesome - all of them! But especially the last version. What a great story, with a big "TA DA!!!" at the end. Now I wonder how it would look with cream chains and just one or two fabrics in the center areas. I may just have to find out myself.

Love this pattern Joanna! Especially the reversed version! It's beautiful!

I am head over heels for this...I completely understand all the attention these quilts received at market, this pattern is pure genious. Congratulations on a lovely three-for-one quilt pattern and this is merely one of many new additions!

Love, love, love this pattern. And I'm thinking how fun to have it in both versions in a room. Its so simple, yet complicated and unexpected. Right now I am piecing hexagons using Fresh Cotton in a quilt a long love the way the patterns work together.