My life turned a sharp [well perhaps I'm being just a bit dramatic] turn a few days ago when our trusted contractor of old called us to say that his guys had some time to do all those little projects we had wanted him to do but he never had time [this includes everything from serious garage work, to building furniture, to altering a porch, to fixing concrete, and on and on...]. Well that is all well and good and we are very glad he can fit us into his schedule, but WE'RE NOT READY! The garage has become a depository of every imagineable piece of flea market furniture, random boxes, old kid's toys, scattered tools, dog beds, garden trash,... remember that photo I showed you of my studio floor right after Market? Well imagine that x10, garage size! Its an ugly thought... pictures would be a bad idea. The same day he called, I came down with some nasty bug that left me going back and forth from the bathroom to my bed and not much else for the next 2 days- its not been a good year for my stomach I tell you- TMI I know, but just thought I'd share. Needless to say, the last few days have been a bit sketchy around here but the end result so far is that I am feeling better, we have installed our hot tub and we have a completed new country fence! I love it. It still needs to be painted & then I'll take some pics. I'm having visions of the boys doing Tom Sawyer impressions with the whitewash... or was that Huckleberry Finn? Wish I had taken before photos of the ivy nightmare that was our fence before, but as you all must know by now, my photo chronicaling skills leave something to be desired! On a totally different topic, this weekend I was able to take a quick jump over to an Amish Quilt Faire. Apparently there is an organization 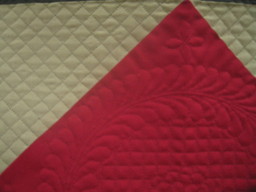 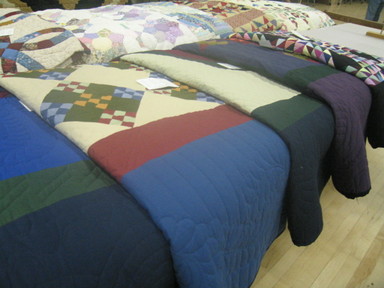 that helps to sponsor these fairs around the country in order to help the Amish support themselves, hand making & selling the crafts and quilts that they are so famous for. The show was full of traditional amish quilts, dolls, bonnets, jams, and numerous other crafts. Who knew that the Amish were known for their handmade broom making skills! I did take a few pictures before they told me I couldn't. I just love looking at the hand quilting and applique. I like to think about the fact that communities of these ladies have been quilting for hundreds of years. They have come before us... 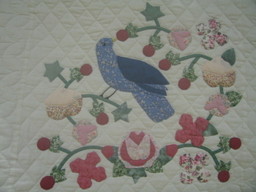 But most importantly, I acquired the item for which I went... an old-fashioned wood laundry hanger. I had seen an almost identical one at the Flea Market last month and I was having visions of using it as a quilt hanger...laundry, ha, ha, who has time to do and hang laundry!! It's all about how to display the quilt at our house :-). My friend Diana had told me about this Amish Fair and that they make ones almost identical to the one I had seen at the Flea Market. Well, here it is. I love it even with just one quilt on it. For those of you going to Market in Houston, you will see it there as I will be using it as a part of my display set up. Part of that whole dandelion thing I was talking about earlier... more on that later. 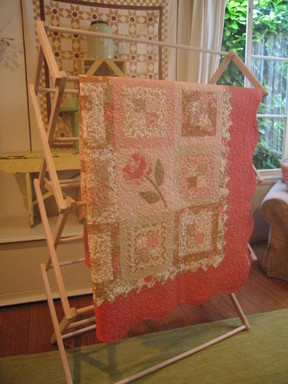 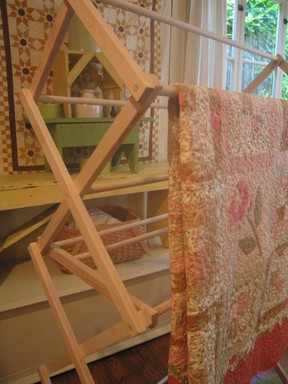 P.S. Several of you have emailed me and asked about the Pine Trees Quilt you saw hanging in the pictures of our Market booth... that will be the featured quilt in the next issue of Fresh Vintage, due out in August. cheerio.

Darling laundry rack! I need to pick one up! I grew up in the Hayward Hills and I love the Amish quilt show! :) How fun!

Love that quilt rack AND that quilt!! I will be making that one when Allspice Tapestry comes out. And, there you go again, teasing us with your Dandelions yet again.....no fair!

I love that quilt rack - but peering into the background of the pic I love the stools stacked up. It must be wonderful to be able to go to see the Amish fair, glad you got a couple of pics to show us.

Just a short note to say how much I love your quilt designs and the colors used in designing them. Haven't made one yet, but it is on my agenda. Thank you. Karen